The business of Johs. H. Giæver took over in 1868 was started by Tomas A. Lyng on 22 August 1795 according to a copy of the royal grant. Tomas A. Lyng was married to the legendary "Mother Lyng" who had 12 children, none of whom survived. The story goes that she adopted 32 foster children when she was not fortunate enough to have children of her own.

The buildings at Havnnes were not burned during the evacuation in the fall of 1944 - unlike all other houses on Uløya. On returning home in May 1945, posters were found telling German that the place should not be burned because it had artistic value (Künstlerisch wertvoll - daher nicht zerstören! Was written with ink on cellulose cardboard - the crisis feed of the crisis).

The company Johs. H. Giæver AS currently operates in several locations; Havnnes, Djupvik and Henningsvær. We run an extensive business with production and export of fish products, preferably dryfish.

At Havnnes we also run a general store where you can buy most of your groceries. The selection is not as large as it was at the old land dealers where you could buy everything from knitting needles and fishing gear to clothes and shoes.

We can offer freshly baked bread and fresh newspapers from 0900. We also have mail in butikk, so we make sure that the island's residents get their mail from the store opens and they have the opportunity to pick up and send packages, letters and mail orders. It is also possible to withdraw money from an account in DnB, and we have a payment terminal. (ApplePay, GooglePay, Vipps, VISA, MasterCard and American Express). We also have 95 octane petrol and diesel for boats.

In Gammelbrygga from 1893 we have a small museum with objects that have been for sale in the old country store, as well as some old office equipment. On the 2nd floor we have a unique photo exhibition with pictures taken by Annie Giæver. The pictures were taken between 1900 and 1955 and show daily life along the coast during this period. The exhibition also includes photos from the Kautokeino reindeer rides and out to the coast when the reindeer were out on summer pastures. The exhibition is well worth a visit.

We lay there behind Hundred Mile and all over the world hidden Even the children of the country half thought we were there but did not know it. And something so happened to Rest No something so hopelessly Forgotten 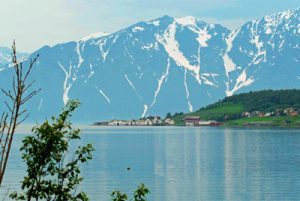 List of literature where you can read more about Havnnes.